Accessing the Bluebird Cafe, Television Centre, White City, London, is actually a lot easier than it seemed on our first visit when we pulled into an open ‘Access’ road – per the sign – and I got shouted at by a grumpy gatekeeper/security man.

Some people just seem to want to be unpleasant, don’t they?

Okay, we weren’t sure where to go but the road did say it was an access road. It had drop off bays. There was no other vehicle than our car on the road. I repeat, it was our first visit.

The staff had said to pull into the access road as the closest spot to drop me off. And, D had left the car, with me in it, only to see how I was going to negotiate my wheelchair across the terrain to the restaurant. We had no intention to park up, just trying to see where there was access for me. Westfield car park is just across the road – easy for D to walk but less easy for me to wheel from, not knowing the condition of road and pavement on what has been a building site for years.

In the few minutes that D was absent, this unpleasant man appeared, came across to me and yelled for me to move the car. My Blue Badge was on the dashboard, clearly visible as was the wheelchair in which I was sitting. I am unable to drive our car.

He couldn’t know this so I pointed at the Badge and wheelchair and tried to explain my situation. He screamed at me to open the doors as he ‘couldn’t hear me.’

I can’t reach to open the doors or windows and, frankly, wouldn’t open either to allow some furious man to have at me. I again tried to explain but he simply didn’t want to listen.

He continued shouting at me as I stared at him in amazement, prowling round the car, glaring at me through the side window. Where does this kind of anger come from? It seemed so disproportionate to behave this way to a lone female, wheelchair user or not. I can’t say I was terrified but certainly uncomfortable as I contemplated his bristling fury.

Luckily, D returned within 2-3 minutes. D is a big guy and, guess what, Mr Angry calmed right down at the sight of him. Suddenly, he became concerned. Suggested there’d been a ‘misunderstanding’.

Obviously, there was little point in pursuing it. I wasn’t in a forgiving mood but he did then walk me across to the restaurant whilst D parked at Westfield. He even checked our friends were inside before leaving me. Maybe he’d just had a bad day. It happens but it sure didn’t start our evening well.

Our friends, who’d seen it all from inside the cafe, were like, ‘Wow, what was that about …?’ They’d been on the verge of coming out to rescue me. Hilarious, as I am the least damsel-in-distress type that you can imagine. But, as I’d said to D, it does shake you up a bit to be confronted with that kind of aggression coming from nowhere it seems.

As it turned out, the wheelchair access was great. Very easy, long gentle slopes and all in tip-top wheeling condition – see bottom two images below. Drop off from the road outside the Centre was best for me and D had no trouble parking in Westfield. Rolled straight in to the restaurant.

The Bluebird Cafe was okay – a mid-priced restaurant that felt much like an updated Carluccios. The location is pleasant if somewhat quiet at the moment. However, the incredibly loud piped music was infuriating, inhibiting all conversation.

They’d clearly like to be a hip, buzzing, jumping joint and, perhaps they will be one day but, right now, people are going for after work snacks or supper with friends and it’s annoying to be bombarded with super-loud muzak.

As you might guess, I’m really not sure I’ll be heading back, not even to nearby White City House, a Soho House offshoot, as, popping in there after our meal, they seem to have a similar music problem and even more desperation to be a happening, trendy place.

People, this is White City. When was trendy ever happening here? 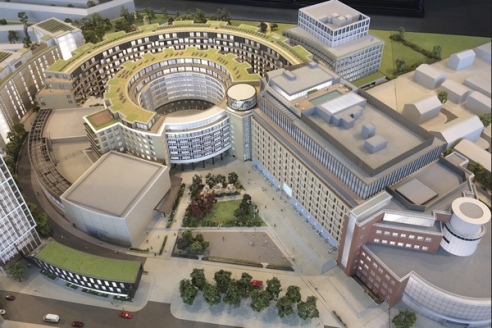