Hands up, I confess, me and D are huge fans of the Four Seasons hotels. We’ve stayed in quite a few, like their  oh-so-comfy-luxe vibe and love their service.

From West London, it is quite a trek across town to get to this Four Seasons which is close to Tower Bridge. Traffic was light – it’s mid-February and it was wet (as in who goes out in deepest winter? Ideal time, if you are up to it) – but it still took just over an hour to drive even though we left early at 5.30pm.

As former City workers, we’d expected this so, no problem and neither was blue Badge parking because we’d called ahead and the wonderful staff held a space for us and met us outside to guide us through access for the wheelchair. See why we love them – service: brilliant.

Wheelchair access is to the side of the main entrance via an open platform lift. I was a bit nervy because I always am when covering new ground but it was fine. With my power-chairs’ long wheelbase, I had to fit across the diagonal but there was ample space for that though the clear glass surrounds did invoke a bit of vertigo when I saw the long drop down the inside. The lift rises just a couple of feet (equivalent to six-eight steps) then it’s level all the way across smooth floors to the restaurant.

The hotel, what we saw of it, looks magnificent, being a historic building – the 1922 headquarters of the Port of London Authority.

The La Dame De Pic Restaurant is beautiful, image above, if a little chilly in feel – lots of high ceilings, mirrors and windows. Warming the mood are dark floors, cosy nooks, comfortable and generous furniture and the service (again).

And so, to the meal: do click across to La Dame De Pic to peruse sample menus.

On this occasion, we decided to choose a la carte because I really wanted the Hereford beef:

Roasted with Monts Amaro coffee and cinnamon leaves, celeriac in brown butter with gin and sobacha

And totally delicious it was – knife-meltingly tender.

Of the courses we chose – langoustine, crab, the beef, Brittany pigeon, chocolate whatever-it-was and the White Millefeuille, just two were a little under-whelming: the crab (too chilly and the subtlety of the crab indistinct) and the chocolate dessert (a bit boring).

Everything else was really very good with lots of tasting interest and fun to be found in the amuse-bouches and petit fours. The langoustine, both beef and pigeon dishes and the White Millefeuille, image below, a signature dish, were absolutely delicious and – the Millefeuille ♥️ – so pretty to look at.

Pink champagne, really decent wine (D’s opinion), coffees and more brilliant service. Oh, one bad mark: dreadful hot chocolate. I had to replace it with coffee. Eek, how do the Four Seasons not do a brilliant hot chocolate – like the Colony Grill Room at The Beaumont who do hot chocolate to die for?

Anyway, despite a few ‘soft opening’ glitches, we had a great evening and an almost great meal. I think we’ll be back – the White Millefeuille demands it. Maybe we’ll see you there? 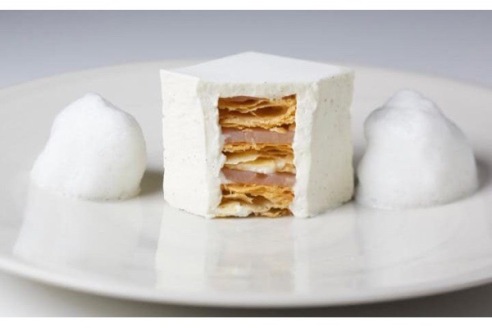