Amidst the chaos of my house renovation, I’ve failed to blog about a few of the restaurants that I visited over the Christmas and New Year period. Red Rooster at The Curtain hotel in Shoreditch in London was one of these.

We went there looking for a convivial venue to have a meal with a larger group, about 10 people.  Relaxed rather than formal; some funky background music – casual, fun, socialising.

We were attracted to Red Rooster from its’ NY reputation,  and what’s not to like about Jamaican style rice and peas:

Acclaimed New York chef and restaurateur Marcus Samuelsson brings his renowned Harlem restaurant to Shoreditch. Red Rooster Shoreditch celebrates the roots of American cuisine, channelling Southern soul food alongside the diverse culinary traditions of New York and Marcus’s Northern European upbringing. Staying true to its Harlem roots, the London Red Rooster outpost features many of the same dishes as the original, along with some new ones, created especially for its new London home. What’s more, we’re open until 2am for late night drinks Thursday to Saturday and there’s a programme of live music every single week!

D&me booked in to check it out for access and to see if it delivered on it’s promise.

It all started well with an easy trip across town to The Curtain Hotel.

There was a pavement outside, not on the main road but on the left in the image below, where D was able to drop me off.  He then looped the block to park in an adjacent disabled parking bay.

I rolled down to the entrance where, immediately on the left of the circular doors that you can see in the image, was a level entrance with a wide, automatically opening, door. From there, across a level floor to a lift. 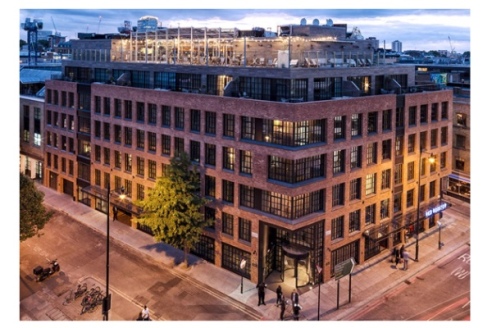 And, that’s where it got more tricky.The lift opened to a corridor where I was taken,  through twisty turns – all negotiable – into the bar area which you see below. 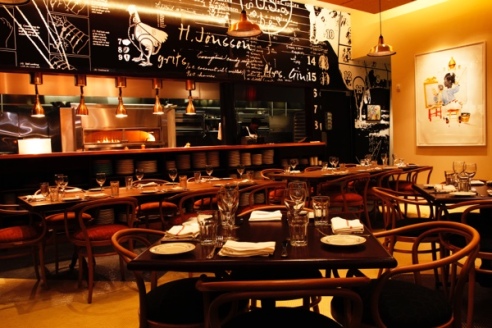 We were there post-shopping, so quite early, and, luckily, the bar was not busy. Even so, it was crowded with furniture which all had to be shifted about as I was led through to the restaurant area. 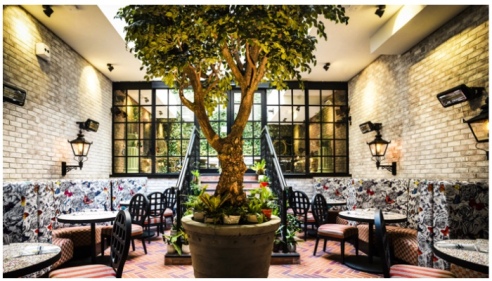 The restaurant space, above, looks quite big doesn’t it? I can assure you it isn’t. They must’ve used a wide angle camera for that shot. Though the tree and its’ pot is every bit as large as it looks.

I cannot imagine that the space, containing perhaps six-eight tables, is less than 4 m x 4 m and, the room is very tall. With the bare brick walls, it felt like a prison cell. It was most bizarre sitting in there. And it was chilly. Totally lacking in atmosphere. Try as they clearly had with the interior decor, it did not help. Too new; too bland; too dull. I felt sorry for the tree in its’ pot.

The positioning of the seating, with the banquette style booths, meant that there was no hope our party of 10 could meet here – each table held just 4-6 people.

I had to squeeze my wheelchair around the plant, fidget about at the table to get a position that worked for me – our table was the one just to the right of the plant pot. There was barely space for the waiter to serve and  the next guests had to squeeze in around us, interrupting our meal.

It was not comfortable, sociable nor fun. Totally soul-less, in fact.

Sadly, the food did not improve matters. Keeping it brief – if you can’t say anything good, best say nothing at all – I’ll skip over the starters , though how any professional kitchen manages to serve up a bad chestnut soup is beyond me. More positively, the rice, peas and chicken were actually not too bad.  Sadly, nothing of note in desserts.

This was not a place to linger and we didn’t stay long. As we left, through a heaving bar, we did notice that the place was teeming with young, funky people who looked to be having a good time. Obviously, not there to eat.